Back in September, I was starting out in mobile development. I knew eventually I wanted to get into social apps. While I had the technical knowledge, I wasn’t quite ready to jump on something of large scale. I wanted to test some theories on a small scale. Coming from a small town, I thought they were the perfect audience, so I decided to build something for them. I knew if I built the right kind of app, it would easily go viral, even if I just sent it to 3-4 people. While people have thought the era of “Facemash” or “Hot or Not” type websites died, I decided to give it a run to see if I could prove people wrong. With the right well-connected, opinionated audience, I thought it could be replicated. However, it can’t be a website like Facemash as that will never catch on in this day and age. Snapchat, Uber, and Instragram only had their intense growth because they were on mobile platforms. So I knew building a website wasn’t going to be needed for this. This clip may jog your memory: 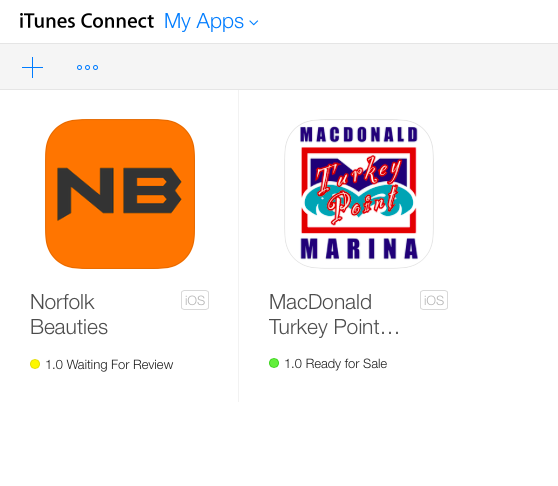 I built the app over a few days at the end of September while sitting in class. Eventually by October 4th or so, I had found the time to get the app graphics done and submitted it to the App store for approval. After a week, it was denied. Apple showed me their terms of service and I had to tweak the semantics a bit to make the app be worthy of the App Store.

Basically, the app was set up in a leaderboard format. I used a tab view controller to split the men and women up. People would enter any name, and then we would review the name to ensure it was legit, usually by a Facebook search because I’m too old to still know the high school kids these days. After approved, they could upvote or downvote the name, once per day. A twist I added was: you could also leave an anonymous comment on each name. This gave people the opportunity to say something nice about a person they don’t talk to on regular basis. Then I got thinking about how fast the app would grow if the comments were not compliments but rumors. Comments should really turbo the growth.

After the first rejection, I removed the downvote feature and made it so comments had to be approved before going live. We ended up not approving any overly harmful comments, even though about 60% of them were. I had my friend Justin help me with moderating some of the submitted content when I was busy so we could keep the new content flowing.

After a long examination by Apple, the app eventually went live December 4th. I didn’t check on it until December 9th so it sat for a while. As I had planned, I told a couple friends and popped the link up on Twitter. This got me the initial 20 users or so. 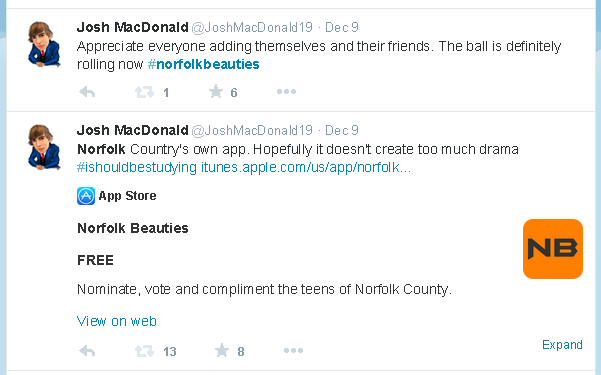 The initial support was positive, but I knew after pondering it for a couple months that it would eventually turn negative because people wouldn’t like it and that would drive the popularity of the app. I just didn’t know when. Eventually, seeing this tweet from a user that received a positive comment from a girl made me realize that it was just the starting of promotion. If more girls kept leaving comments on guys’ profiles, the app would continue to grow. This is what I was hoping for.

Today December 15th, on the 7th day of promotion, the activity really picked up from a few tweets and it hit 200 users on the iPhone. I knew it would eventually be the negativity that drove it. Just goes to show the raw power of Twitter. 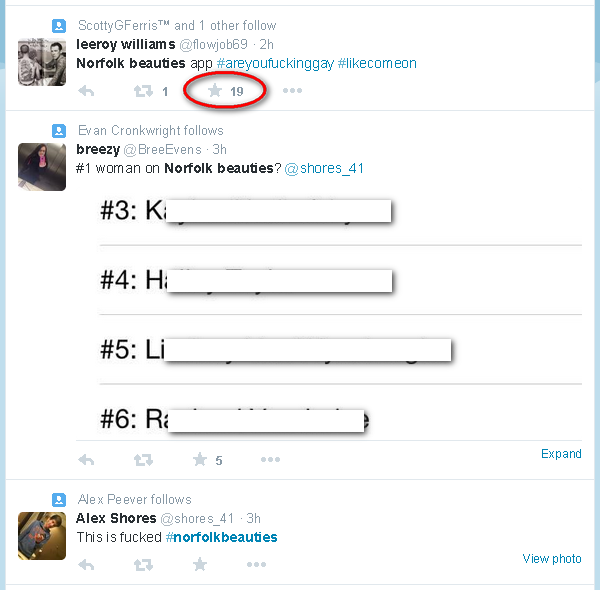 Additionally, I was informed there was conversation buzzing at the police station about the app with regard to “cyberbullying”. For those of you thinking about replicating this in your home town, I wouldn’t be worried about the police. It’s the internet and people are free to say what they’d like. If you were serious about keeping it goes and it got to the point where you have to take it down, the buzz would be so strong that you could easily transfer the database to an offshore website where your local government does not have jurisdiction.

I figure I can ride this to 1000 users but I’ve already learned what I want to, and my intentions were not necessarily to piss people off but study them. Secondly, I want to keep my Apple developer account in good standing for future apps, so I decided to take the ethical route and disable the web service that supported the app, so nothing would load. I didn’t pull it right off because I was under a bit of pressure and wasn’t sure if I’d want to re-list it later and didn’t want to wait months to get it re-reviewed. The next day, Apple pulled it off the app store. Rumors are, is a girl from my town wasn’t first place so she reported it to Apple. It could have also been the police.

Apps are so elegant in the way that you can just create an environment for a specific demographic of people to express themselves and they’ll jump on it without hesitation.

If you are going to replicate it, you need a small community like a small college/university or a small town.  The structure I used is probably the easiest to code. A simple table view the links to another table view that holds the comments. I built it for iOS 8 only and it still did fine even though many people own iPhone 4 and Android phones. American cities tend to not be as iPhone dominate I noticed, so you might get away with Android only instead and Android only costs $25 to get into their store. My demographic contained 5 small high schools totally a population of about 3500 kids. I figure about 1/3 of them have iOS 8 so my target audience was about 1200. The chance that many of the kids knew each other was reasonably high as the kids that were submitted were usually at least some-what popular.

This theory goes for a lot of things in SEO and internet marketing. Just because everyone is saying it’s a dead method, doesn’t mean you shouldn’t give it a shot. Throw a twist on it and you might surprise yourself. It’s time for another app with a bigger demographic now. 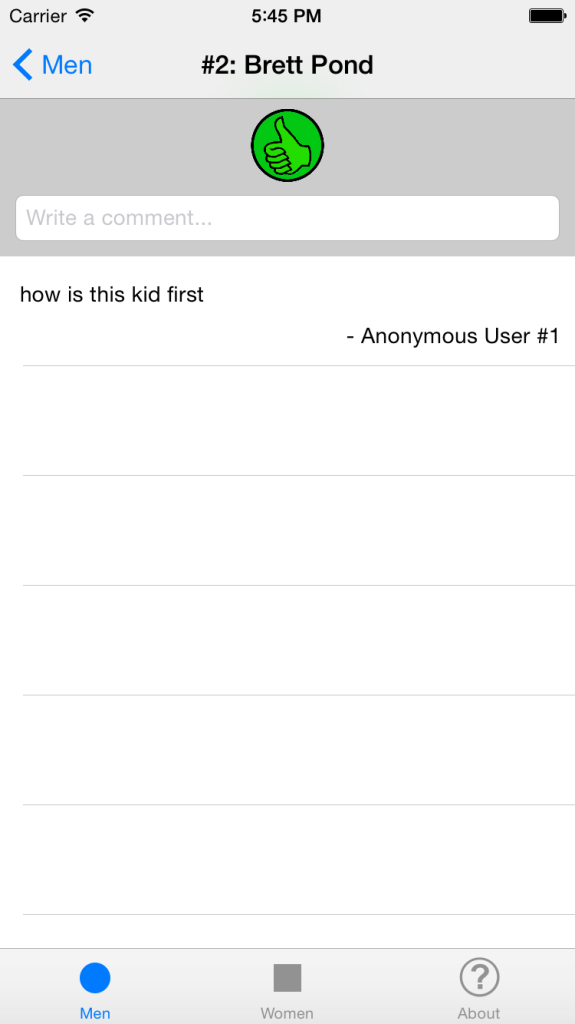 Commenting anonymously on a person’s profile. 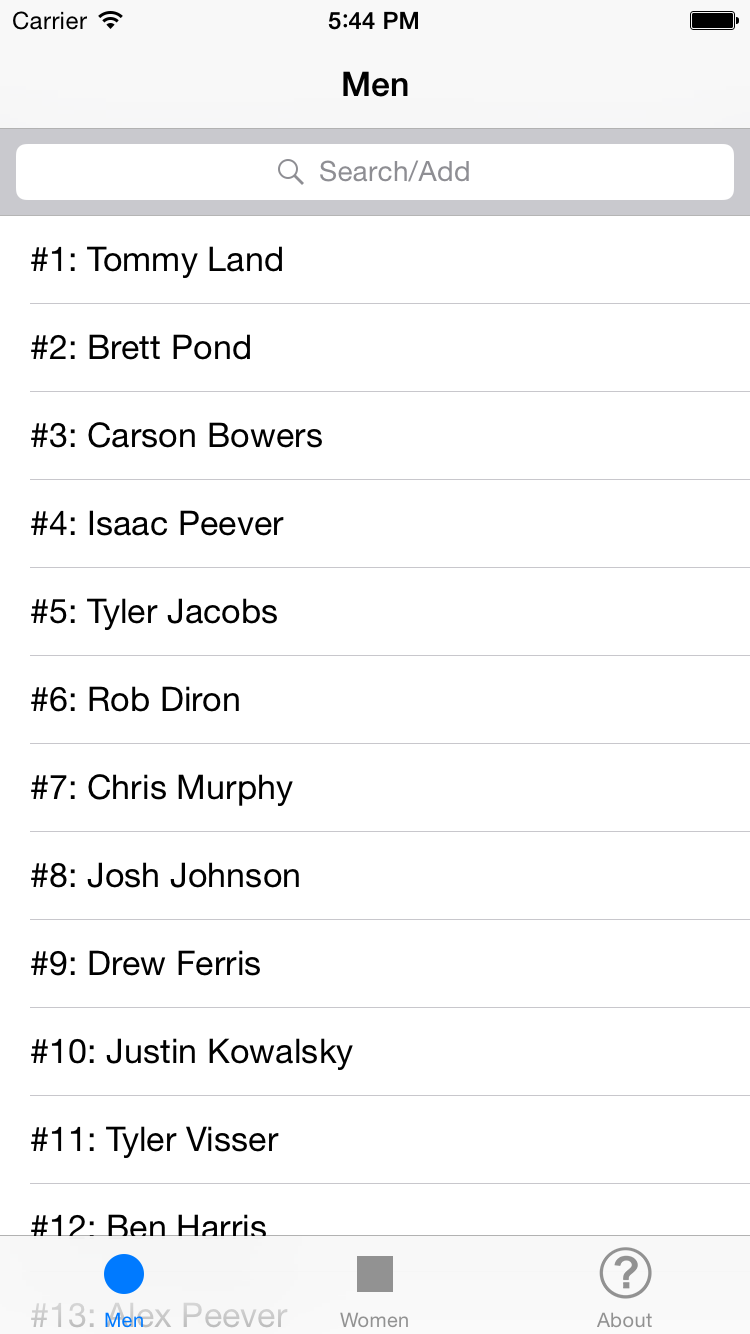 After a couple hours in, more names were submitted quickly. 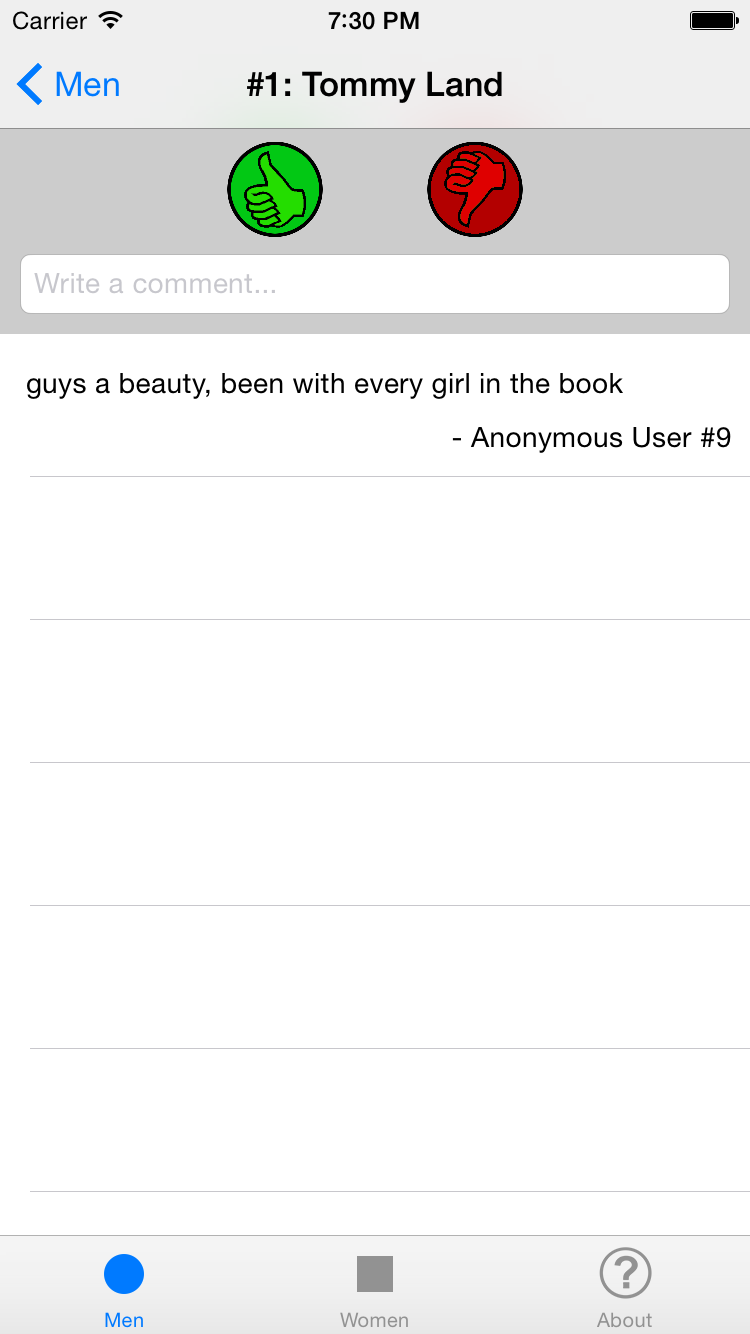 The app initially had a down vote button, but was removed to reduce hate and comply with Apple.

3 Websites to Get a Logo Made